It should be noted that the trumpet is said to be the favorite instrument of Maestro Abreu, the man who turned Venezuela into a musical superpower by getting underprivileged children interested in classical 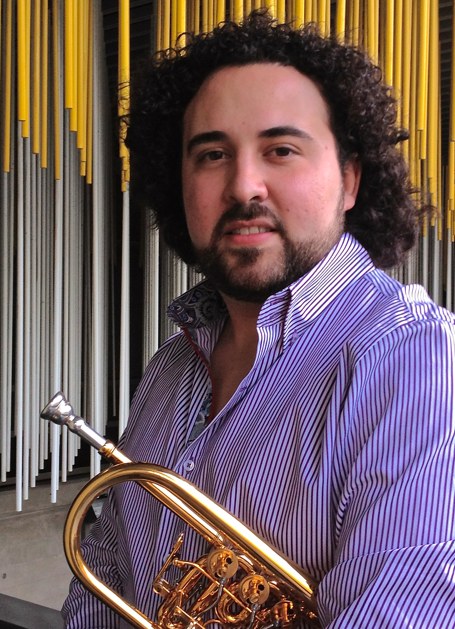 music and providing them free tuition and paid working opportunities. Abreu conducted André's last appearances in Venezuela in 1987, as could be seen in a video at the opening ceremony of the festival ¡Grande Maurice! held at the Centro de Acción Social por la Música in Caracas from April 16 to 22. The week was organized by the Academia Latinoamericana de la Trompeta and the Conservatorio “Simón Bolívar” under the auspices of Abreu's government-funded Fundación Musical Simón Bolívar. The Spanish instrument maker Vincente Honorato was the special guest of the event. The idea to organize a festival in honor of the French trumpet icon, less than two months after his passing, was born by Gaudy Sánchez and Andrés González, members of the Sinfónica “Simón Bolívar” trumpet section and teachers at the Academia Latinoamericana. “At first we'd planned just two concerts, but after a few glasses of Scotch things got out of hand, and the next morning we woke up to this seven day monster project,” says Sánchez. 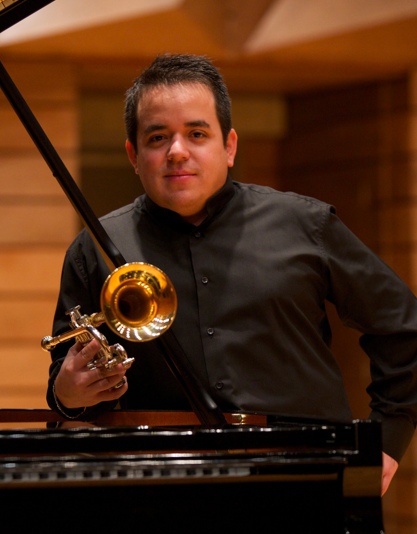 The festival included one to three concerts each day, lectures and daily master classes by all twelve teachers of the Academia Latinoamericana and the Bolívar Conservatory, as well as by guest professors Rafael Zambrano (Colombia) and Max Sommerhalder (Germany). Linda Briceño and her rhythm section gave a lecture-recital on the trumpet in jazz. Vicente Honorato talked about trumpet acoustics, the psychology of sound perception and choice of instruments. Eleven music school teachers with their 180 students from all over the country and countless trumpet and music enthusiasts attended the festival. Twenty-four members of the Sinfónica “Simón Bolívar” trumpet section as well as seven members of the Sinfónica Juvenil “Teresa Carreño” and four members of the Sinfónica Juvenil de Caracas performed as soloists, topped off by Francisco “Pacho” Flores, international Venezuelan concert artist. Two orchestras, two big bands, two jazz combos and three keyboard players provided accompaniment. In the course of the week, over eighty works were performed, covering the standard repertoire of “classical” trumpet playing in its entirety, including notorious modern competition touchstones, as well as many new works and folk music titles. Despite his huge workload, Maestro Abreu attended as many concerts as possible, rising to his feet each time to applaud the performers. 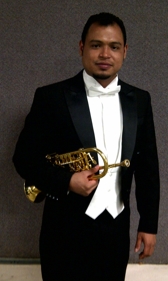 Early highlights: The Spirit of the Baroque, Gaudy Sánchez and Pacho Flores

The first concert of the festival featured the string orchestra Espiritu Barroco Venezolano, led by concertmaster Boris Paredes, performing on modern instruments but in the style of ‘period’ ensembles, and five young piccolo trumpet players performing sonatas and concertos by Purcell, Torelli, Tartini and Vivaldi. Next was a long trumpet and organ recital by the festival's main brain, Gaudy Sanchez, an alumnus of Éric Aubier. He began with Telemann's Concert Sonata, the last piece André played on Venezuelan soil, continued with pieces by Gounod (including a harpist), Bach, Damase, Castells (with a marimba), and ended with La Semaine Sainte à Cuzco, Henri Tomasi's homage to Latin America. The recital earned him the first standing ovation of the festival.

Later Francisco “Pacho” Flores, winner of the very last Maurice André competition in 2006, gave a recital in Caracas' Simón Bolívar Hall. Accompanied by the Spanish pianist Pepe Gallego and surrounded by a battery of seven instruments, Flores opened with Charlier's Solo de Concours which led to his rendition of Sarasate's Gypsy Airs and Goedicke’s Concert Etude, followed by a set of Spanish and Venezuelan compositions, A mis hermanos by Aquiles Baez, a piece written for guitar and arranged for four-valved flugelhorn by Flores, Habanera by Ernesto Halffter, Piezas andaluzas by Santiago Baez and 1969 composed by Antonio Sánchez for the Spanish trumpeter Luis González. After Flores and Gallego finished Joseph Turrin's Caprice, the audience leaped to their feet immediately, extorting two encores, compositions for guitar by the Venezuelan Antonio Lauro (1917-1986).

The trumpet ensemble from the Sinfónica “Simón Bolívar” and the Cuarteto de Trompetas de Venezuela both performed as part of the festival. The trumpet ensemble of the Sinfónica “Simón Bolívar,” formed by eight of the orchestra's most experienced players, performed repertoire from Gabrieli to Ewazen on rotary-valved trumpets. The ensemble was founded and is led by principal trumpeter Tomás Medina. The Cuarteto de Trompetas de Venezuela, mixing piston and rotary trumpets and operating with a ‘rhythm section’ of tuba and percussion, contrasted the octet.

Soloists with the Sinfónica “Simón Bolívar” 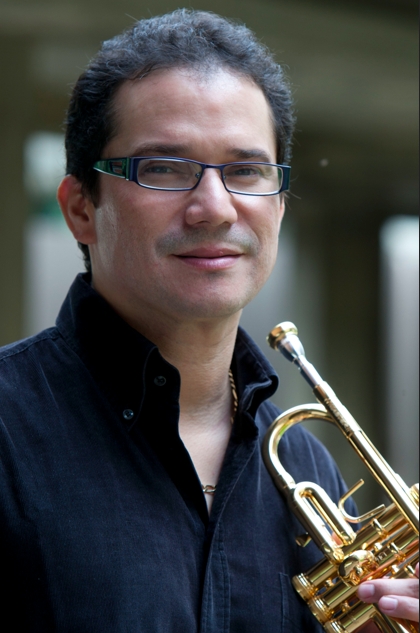 The festival featured two concerts involving the Sinfónica “Simón Bolívar,” currently recording the complete Mahler symphonies under Gustavo Dudamel for Deutsche Grammophon, with trumpet soloists. Luis Castro conducted Alexander Barrios’ rendition of Aaron Copland’s Quiet City as well as the Jolivet Concertino with trumpet soloist Gaudy Sánchez and the piano obbligato performed by Swiss pianist Christoph Keller. Next Victor Caldera paid tribute to Alexander Arutiunian who had passed away only a month after Maurice André. Francisco “Pacho” Flores performed the trumpet concerto “Mestizo,” commissioned from the Venezuelan composer Efrain Oscher by the Bolívar Music Foundation in 2010. Written in a very eclectic style, blending the musical idioms of twentieth century Europe with those of Venezuelan folk music. The audience demanded an encore from Flores, who performed an intimate guitar piece played on the flugelhorn.

In the final symphonic concert on Sunday, April 22, the Sinfónica Bolívar played under the baton of one of its members, trumpeter Andrés Ascanio, a conducting student of José Antonio Abreu. Gustavo Merlo performed the four-movement Telemann concerto.

Also on the concert was Bach’s second Brandenburg Concerto, with the trumpet part performed by Werlink Casanova. The concert ended with Heinrich Stölzel's Concerto for 6 Trumpets featuring Giancarlo Castro as principal. Castro is also the composer of the Fanfare ¡Grande Maurice! premiered by all members of the Sinfónica “Simón Bolívar” trumpet section.

To conclude, the massed 270 participants, dispersed in the audience, performed Charpentier's Te Deum and Clarke's Trumpet Voluntary, to the surprise of more than one thousand listeners in Bolívar Hall. The festival was planned to end with a Café Concert featuring the Chipi Chacón Jazz Project, the Simón Bolívar Jazz Big Band led by Andrés Briceño and Alberto Vergara's Orquesta Latinocaribeña Simón Bolívar, but due to the death of an important member of the foundation, that concert was canceled. Even so the festival remained as a showcase of Venezuelan trumpet artistry. 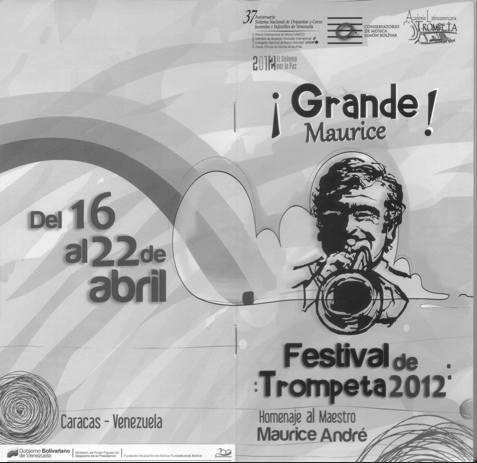 "Joining ITG is the best way to have friendships with fellow 'sufferers’!” Doc Severinsen

Take advantage of what ITG has to offer: JOIN ITG